RABB’s Back To Chicago finishes at #15 in the 2018 Living Blues Magazine radio airplay charts!

The Rockwell Avenue Blues Band’s release, Back To Chicago, was included in the top 10 blues releases of 2018 by Christophe Poirot in Soul Bag Magazine in Paris. Soul Bag is the largest and most storied blues publication in France.

The Roots Music Report has selected Back To Chicago as one of the
top 5 CDs of 2018!

Back To Chicago
The Rockwell Avenue Blues Band 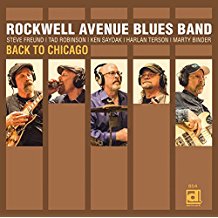 Despite the successes each member of the Rockwell Avenue Blues Band has achieved over long parallel careers, there was some unfinished business to attend to. Longtime bonds, which sometimes elude conscious recognition, drew them to Delmark’s Riverside Studio on Chicago’s North Rockwell Avenue in October of 2017. It was a joyous musical and artistic reunion. They had all recorded for Delmark over the past decades. Now it was time to join together again, as equals who had shared a lifestyle and craft, each in his own way, each with his own voice. So they took a week away from their routines to share a brief moment, frozen in time on Back To Chicago.

The good folks at Delmark Records have just released a straight-ahead Chicago Blues album that feels as timely as it does timeless. Nothing new about that, as for over 50 years this label has been the vanguard of the Chicago blues music scene. Their release of Junior Wells’ Hoodoo Man Blues and Magic Sam’s West Side Soul are seminal events in

The appropriately named album, Back to Chicago, is an album by a blues collective known as Rockwell Avenue Blues Band. They are led by Tad Robinson, Steve Freund and Ken Saydak. They are joined by bassist Harlan Terson and drummer Marty Binder. Robinson, Freund and Saydak all contribute songs to this generous fifteen-song offering. Bassist Terson writes two songs to round out this mostly original set of music. Robinson, Freund and Saydak divide singing duties evenly and their contrasting styles help to make Back to Chicago a fun journey through the blues.

Robinson continues to bring a more soul and gospel oriented vocal approach to his original songs. However, the blues can be heard in his singing to a greater degree than on his recent Severn Records outings. Freund, whose guitar playing garners much deserved attention, remains one of my favorite blues singers in the business. He draws in listeners and holds their attention without the vocal histrionics that often replace true depth and emotional honesty in the modern blues world.

Then there is Ken Saydak. It is his songwriting and singing that make him sound like a barroom bard, street sage and soapbox preacher all rolled into one cat disguised as a gifted pianist and organist. His songs on Back to Chicago are full of original ideas and creative choices and he applies them to a traditional blues template.

On Back To Chicago the musicianship is first rate. Freund’s guitar, Robinson’s harp playing and Saydak’s keyboards share the spotlight and the first-rate rhythm section holds everything together to make a tightly wound ensemble sound.

Back to Chicago was taken from a three-day session recorded back at the end of 2017 by Dick Shurman. The results are spectacular, as this is a truly experienced band of real blues pros who have been around the block more than a few times. Their command of the blues language is apparent from start to finish. While they all have had marvelous careers accompanying some of the best players in the business, and have numerous recordings under their own names, the combination of talent that represents the Rockwell Avenue Blues Band is a high point for each player. On Back to Chicago the whole is greater than the sum of it’s parts.